Is creativity superior to intelligence?

The answer is YES!

Why is this important?

For teachers it is helpful in planning educational programs, curriculums, tests, activities, and classroom setting and for parents knowing this gives you an edge in all aspects of yours and your child’s life.

Intelligence is measures by IQ tests and creativity is measured by the lesser known Torrence Test. It is generally held that one’s IQ tends to remain relatively stable over your lifespan. In 1932, the entire population of Scottish 11-year-olds (87, 498 children) took an IQ test. Over 60 years later, psychologists Ian Deary and Lawrence Whalley tracked down about 500 of them and gave them the same test to take again. The change was a meager .66, to be exact. Those who were at the top of the pack at age 11 also tended to be at the top of the pack at age 80, and those who were at the bottom also tended to stay at the bottom. A few outliers could be found. One person had an IQ of over 100 at age 11, but scored just over 60 at age 80. There are many possible reasons for this outlier, including dementia. Other folks showed IQ increases as they aged. On average, people’s individual (or absolute) scores on the test taken again at age 80 was much higher (over one standard deviation) than their scores had been at age 11, but the rank ordering among people stayed roughly the same.

children. A main reason suggested by researchers is that creativity has often been given less educational consideration and focus than intelligence and therefore is less encouraged in schools. Some educational systems are considered as actually barriers to developing creative individuals. The potential consequences of a depletion of our children’s creativity are sweeping. The necessity of human ingenuity is undisputed. A recent IBM poll of 1,500 CEOs identified creativity as the No. 1 “leadership competency” of the future. Creativity is essential for human progress!

In fact, many countries around the world have started addressing this erosion of human potential by making creativity development a national priority. In 2008 British secondary-school curricula—from science to foreign language—was revamped to emphasize idea generation, and pilot programs have begun using Torrance’s test to assess their progress. Additionally, different forms of meditation interventions have also been encouraged to improve creativity performance in individuals. 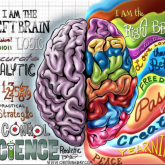 Is a Professional Coach a Better Teacher?

How is Design Thinking Shaping Our Education System?

Three Moves that can be Game-Changing for Education

Interrupting Education as we know it

Past On-Line Lead Up Blogazine Issues